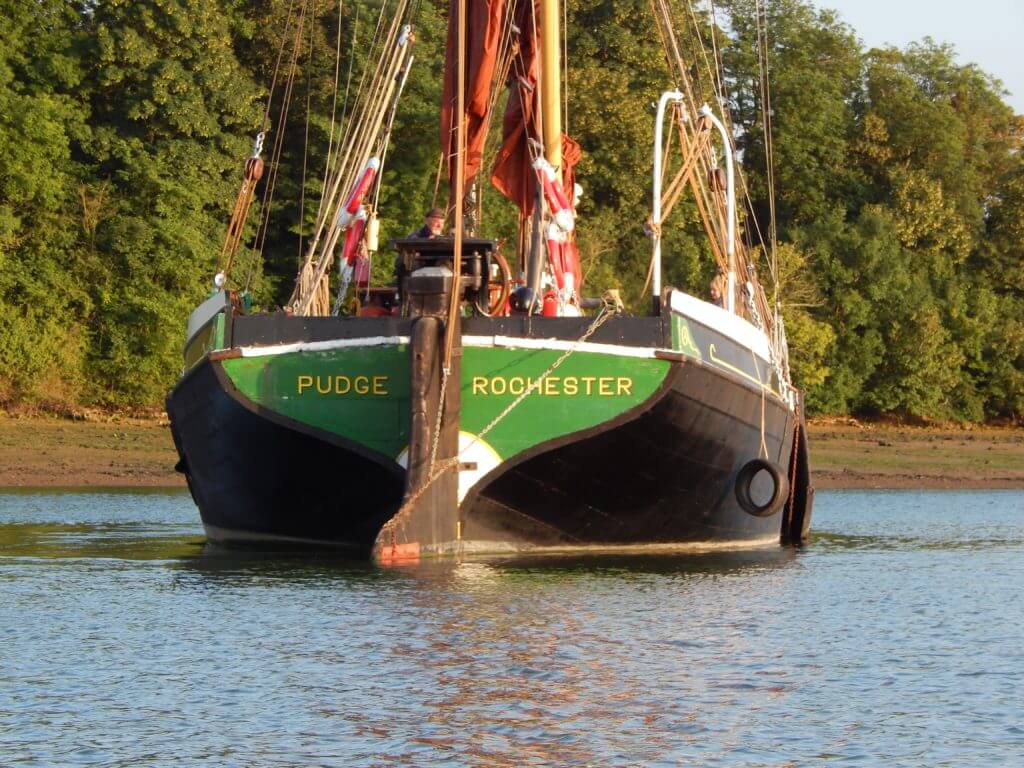 Built in 1922 by London & Rochester Trading Co., Pudge is a Thames sailing barge with a hull constructed of pitch pine on oak with a flush deck, with the steering wheel on a ‘short spindle’ without the usual raised cabin top. Originally spritsail rigged with a bowsprit she had an auxiliary oil engine made by The Bergius Co. Ltd of Glasgow and was installed in 1932. Pudge is one of the last wooden barges to be built, (although further barges were built of steel). Pudge spent much of her working life carrying goods between London and Ipswich. 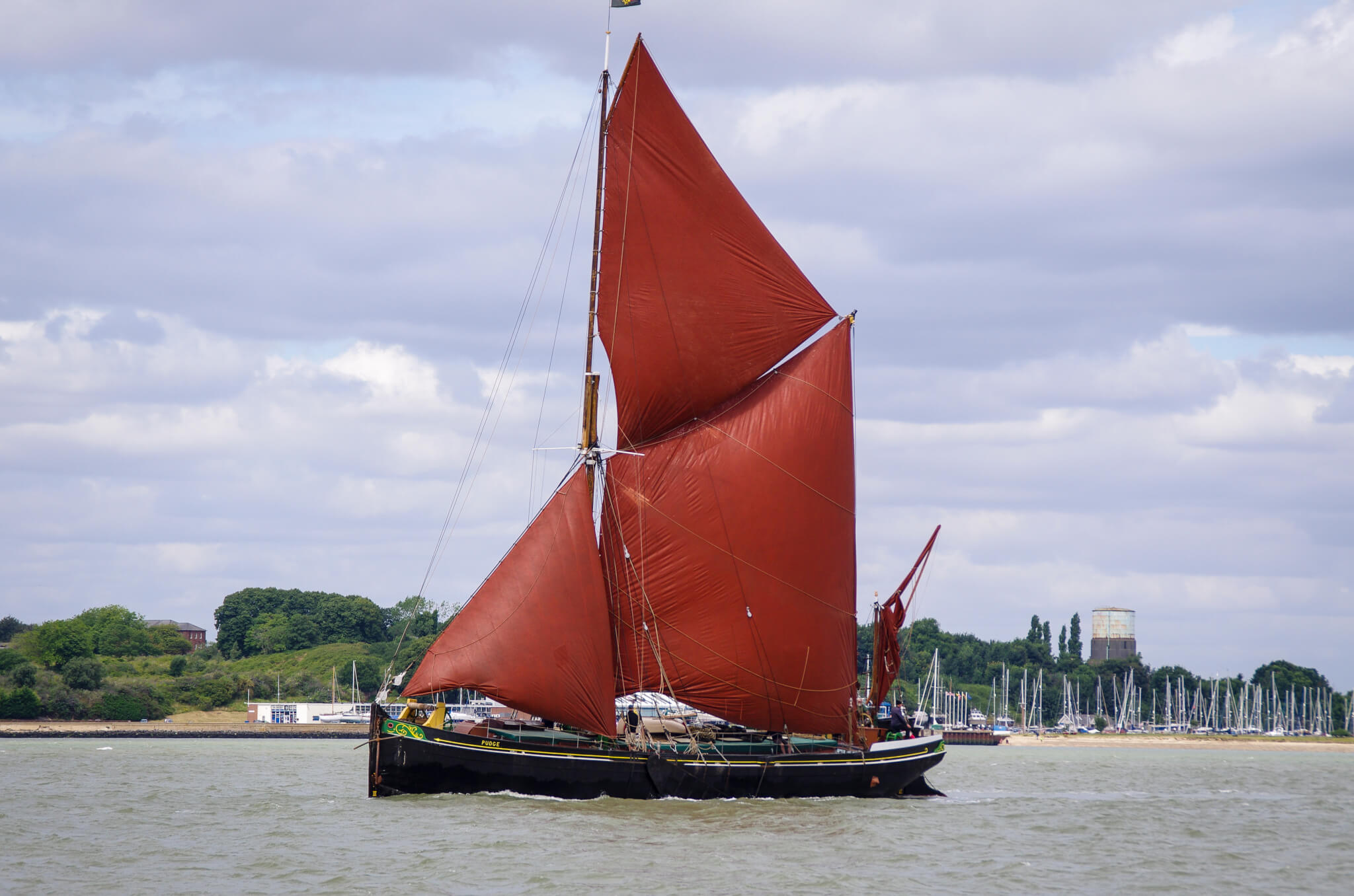 This website uses cookies and similar technology to collect and analyse information about the users of this website. We use this information to enhance the content, advertising and other services available on the site. Please click 'Accept all' to consent to the use of this technology. Alternatively, you can manage individual cookie types.

Once set, you can manage your preferences at any time by using the cookie settings button.
Accept all Cookie settings

Always on
More info
These are the cookies that are required for our website to work properly, usually for things such as logging in. These cookies are always enabled but do not collect any personal data. You can disable all cookies in your browser but this website may not perform correctly.

More info
These cookies allow us to count visits and traffic so we can measure and improve the performance of our site. They help us to identify error pages and the most or least common pages. This allows us to know the best content to send to our visitors. All information these cookies collect is anonymous. You can turn these off at any time.

Built in 1922 by London & Rochester Trading Co., Pudge is a Thames sailing barge with a hull constructed of pitch pine on oak with a flush deck, with the steering wheel on a ‘short spindle’ without the usual raised cabin top. Originally spritsail rigged with a bowsprit she had an auxiliary oil engine made by The Bergius Co. Ltd of Glasgow and was installed in 1932. Pudge is one of the last wooden barges to be built, (although further barges were built of steel). Pudge spent much of her working life carrying goods between London and Ipswich.

Her working life as a cargo carrier was interrupted in spectacular fashion by the Second World War when she was requisitioned in May 1940 whilst in Tilbury, drafted to Dover and thence to Dunkirk to aid the evacuation. Three barges including Pudge were taken in tow by a tug and crossed the Channel under cover of darkness. As they reached the beaches at Dunkirk an explosion lifted Pudge out of the water and, in the words of her skipper, “she came down the right way up”. She took onboard survivors and set off for England, picking up a tow from a tug on the way, to arrive safely back at Ramsgate. Pudge is one of only four of the Dunkirk Spritsail Barges that survive. Pudge is a member of the Association of Dunkirk Little Ships and is entitled to fly the flag of St. George. Pudge is also on the register of National Historic Ships.

Following Dunkirk she then resumed her normal trade in and from London docks, Ipswich and the Medway ports with grain, cattle cake, fertilizer, etc. until her last freight of pineapple juice in 1968 when she was bought out of the trade as a twin hatched motor barge by the Thames Barge Sailing Club. Re-rigged by members for summer weekend sailing and chartering. She was re-engined in 1990 after her passage to commemorate the 50th anniversary of Dunkirk. Since then she returned to Dunkirk for the 75th anniversary in 2015.

The Thames Sailing Barge Club evolved into The Thames Sailing Barge Trust in 2003, and Pudge has continued to run charter trips with the aim of preserving and teaching the skills needed to sail and maintain the traditions of the working sailing barge. A staged programme of renewal began in 2005 at Maylandsea with a rebuild of the bows, progressing to the deck and stern as finances permitted with a return to sail in 2007. Restoration work continues to maintain her fitness for charitable sailing work. We are currently in the process of replacing her decks and coamings and upgrading her accommodation following the award of a grant from the Heritage Lottery and a fundraising programme. She is expected to return to sail in May 2021 a year before her 100th birthday.

In June 2012 Pudge was present at the Queen’s Jubilee Pageant on the Thames as part of the ‘Avenue of Sail’.

The Trust has managed to obtain copies of nearly all of her Crewing Agreements which detail her history in terms of places she visited and the crews that sailed her. These date between 1922 and 1967. We have also been able to identify many of the cargoes she carried and these complete record can be found on the clicking the link below.